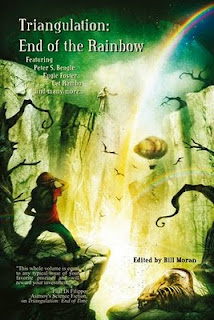 PARSEC Ink's annual sci-fi/fantasy anthology uses what initially appears to be a cheerful theme to unite a number of varied and unlikely short stories. I'm at a loss as to how I haven't heard about the yearly series until now.

Triangulation: End of the Rainbow could have been a cheesy collection in the sweetly manipulative vein of the Chicken Soup for the Soul series. Instead, the stories delve deeply into different subgenres of sci-fi/fantasy, featuring gods, post-apocalyptic societies, and tourist traps for aliens.

Some of the fiction relates in very obvious ways to rainbows, color, or even just The Wizard of Oz. The first story, for example, David Sklar's "The Rainbow Vendor," is just a metaphor for finding where things belong. Or at least that's what my interpretation was. This story is sugary but by no mean sets the tone for the volume.
Then you have creations like Tinatsu Wallace's "A Womb of My Own," where a not so distant future has developed the technology for men to have children, or Ron Sering's "Spirit House," where a man ends up in Bangkok to forget his messy divorce. Neither relates to rainbows in an obvious or cutesy way, but with quiet hints that don't get in the way of a good story.

The fiction is wild and varied, an unexpected but satisfying blend. Some are better than others but all have their moments of grace and interest.
Strong short stories include Amy Treadwell's "The House at the End of the Rainbow," D.K. Thompson's "Haole," and Aaron Polson's "The World in Rubber, Soft and Malleable." Most of the works are deeply involving and juxtapose each other nicely. Please note, though, that because this is an independent publication and staff resources are limited, words pop up missing once in a great while. It's not often but it can be jarring to read an excellent work of fiction and realize someone forgot to add an "and."

The collection ends on a dark note, first with Cat Rambo's "In Order to Conserve," about a world turning to black and white with no hope of regaining its old beauty. Perhaps more chilling is the afterward by editor Bill Moran.

Moran writes about the difficulties of maintaining a magazine in this age, specifically one devoted to fiction and fantasy. "Two cents a word is not a fair rate for the quality of stories we continue to find for these anthologies, not even close," he writes. "Yet it's more than we can justify, even with unpaid staff." He ends his outro talking about how he really believes in his work and knows what he's doing is important, but the tone of defeat is difficult to shake.

Literary magazines have never made very much money. I understand it's a hard business with few rewards.

But I just can't stand to think anyone who's participated in the creation of this book would believe they've failed when they've obviously succeeded so very well.
Posted by Gillian Daniels at 10:34 AM