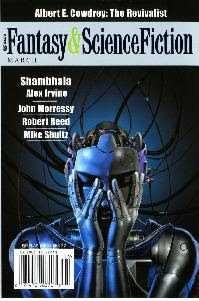 When Edward Fogherty sleeps, he doesn't age. He deals with his coma-like sleeping patterns in the early twentieth century, all the while attracting the attentions of Myra Means, a love interest who is at first a few years older than him. Their age gap, due to Edward's abilities, alters over time.

Dodging drafts and while plotting to remain young into the next century, Cowdrey's often comatose main character eventually learns his abilities have a Rip Van Winkle inspired price.

I discovered this short story/novella in a fantastic March issue of Fantasy & Science Fiction Magazine back in 2006. Edward's attempt to cheat death by spending days and eventually years at a time asleep is entrancing to read about. 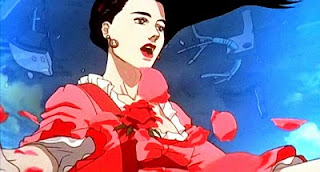 A team of space scavengers looking through interstellar trash receive a distress signal from what appears to be a space station.

Two of their members, family man Heintz and womanizing Miguel, board the craft. They discover an abandoned European palace, complete with looping holograms and portraits of a lovely retired soprano, Eva Friedal.

The ship soon entangles both men in a haunted dream of Eva's own devising, blurring reality for all three of them. To the surprise of no one, the writer who adapted this story to screen is the late Satoshi Kon who would later go on to direct the psychological animated series Paranoia Agent (2004) and hallucinatory movie, Paprika (2006).

An old woman recalls a journey she took into deep space, one that involved spending years of her life in hyper-sleep. Audrey Cather is an exopalentologist and lone survivor of a mission that involves investigating life on Piros, a moon of a distant planet that orbits Gliese 587. Her tale is short but leaves a remarkably dire impression.

Untrustworthy robots and Lovecraftian horrors may be the monsters of this sci-fi horror show, but most unnerving of all is how casually Cather, our narrator, describes not only the alien ruins her crew discover but the ultimately pointless mission that eats away at most of her life.

Another story about the dangers of interstellar sleep, this time told through a chilling music video starring actress Christina Hendricks as a cyborg.

Perhaps it's a metaphor of what we do when we're willing to do anything to reach a goal; maybe it's just an exploration of the saying, "I'd give an arm and a leg." Or it could just be a nice counterpoint to an otherwise low-key song.

Regardless, it's a melancholy journey with a robotic woman and her dream.

Perhaps the best story to end this list on is a retelling of Sleeping Beauty from one of the collections Ellen Datlow and Terri Windling have edited, Black Heart, Ivory Bones. While this book isn't a bad addition to their series of re-told fairy tale anthologies, its best story belongs to author Greg Costikyan.

Applying fantasy tropes to the real world, "And Still She Sleeps" asks why, exactly, Sleeping Beauty is considered a romantic trope. How does a man truly love a woman he's only met while she sleeps? Disney's 1959 adaption of the story solved the problem by suggesting the princess and the prince knew each other beforehand.

Costikyan suggests a woman unearthed during a 19th century excavation may end up sleeping forever when the only men willing to kiss her are the ones attracted to her beauty and nothing more.

It's a sobering point of view. Sleep is only a brief refuge; outside one's body, the world marches on. 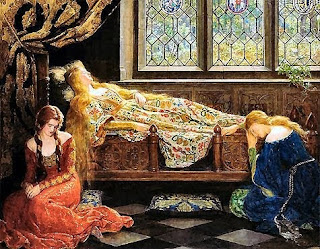