The Secret of a Beautiful Film 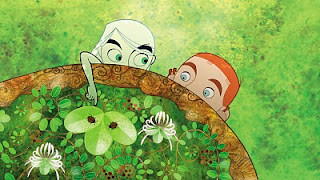 I was told The Secret of Kells is an animated film of exceptional beauty. I was unaware that the love and care put into the story were so exceptional, too.

Brendan (Evan McGuire) lives in the Abbey of Kells where his uncle, the demanding Abbot Cellach (Brendon Gleeson), is building a wall to protect the abbey and its inhabitants from the Vikings.

The young Brendan, consequently, has never ventured outside to the forest that surrounds his home.

He finally does on a mission to find ink-making berries for the gold-bound book his kind mentor, Brother Aidan (Mick Lally), wishes to illuminate (or "illustrate"). In the forest, he meets Aisling (Christen Mooney), a young fairy-creature who is brave and cunning but very afraid of a spirit that lurks in the woods.

Kells features forests that look like the stained glass windows of a Gothic church and the style of a Disney cartoon from the Middle Ages. 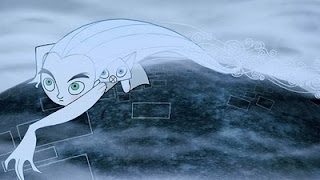 Each character has round, luminous eyes. Heads are sometimes perfectly symmetrical.

The movement along the backgrounds feels not unlike Richard Williams's The Thief and the Cobbler (1995) while the flat but detailed animation is pretty much Genndy Tartakovky's Samurai Jack (2001-2004). The Vikings and/or Northmen, dark and block-shaped creatures, certainly feel like villains out of Tartakovsky's series.

Aisling, the fairy/faery/sidhe/whatever you want to call her, has movements that are liquid and amazing to look at as she scales trees, jumps, and interacts with the protagonist.

An Irish/Beligan/French production, the world of Kells is lush, detailed, and extraordinary.

Besides the art, the story is touching. Brandan's friendship with Aisling may be important to the film, but how he relates to Abbot Cellach is at the core of it. 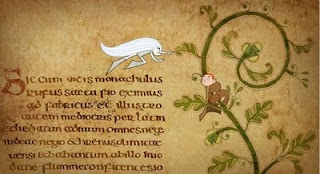 They have a tense and wonderfully complicated relationship, nearly as intricate as the designs Brandan creates. This connection between the characters colors the last leg of the film, where both their relationship and the importance of art and beauty in dark times takes center stage.

The Books of Kells is real, of course, a relic of the ninth century and a fine example of the period's cartography and illustration (or so I've heard).

According to the DVD commentary on The Secret of Kells's U.S. release, the book probably had international influences in its illustrations. This accounts for why some of the monks at the Irish abbey, one of whom is Italian, another black, and a third Asian.

Or perhaps the United Nations look of the abbey is a reference to the difficulty of putting together a film that was animated all over the world. The finances of the movie were reportedly hard to raise. Perhaps the fact this film was made at all only increases its value as a treasure. 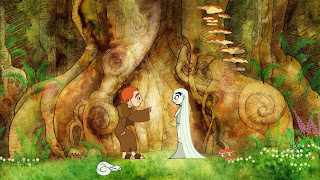 So. Is this film good, fun, both, or neither?

It's very good, a triumph of animation and storytelling. Even if cartoons are not your thing, it's hard not to appreciate the effort that went into making this one.

The movie is child-appropriate, but I can't say for sure the extent to which it would interest some children. There are some fun moments and a good deal of adventure, but the movie can be controlled and very restrained.

It feels like it was made with adults and animation students in mind, not explicitly children. The somber ending may be lost on some.

Or perhaps I underestimate kids and adults with short attention spans. They may not look at the composition of each scene with a magnifying glass, but they'll certainly respond to The Secret of Kells's style and beauty. 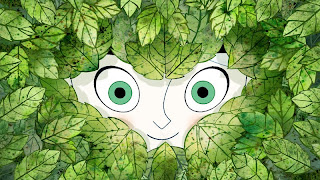 Posted by Gillian Daniels at 7:01 PM