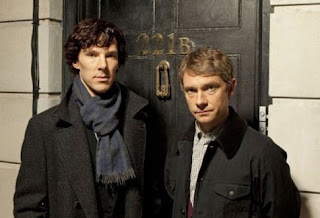 The BBC import is a 21st century update of Sir Arthur Conan Doyle's detective that has an unfortunately brief first season of the three episodes. Luckily, it looks like they're also ninety minutes long.

Masterpiece Mystery Theater kicked off the series stateside by airing "A Study in Pink.” Over the pond, it's already out on DVD, and probably the Internet.

The character of Sherlock Holmes pervades pop culture to a frightening extent. He has been reinvented, reused, and confused for a real person. Only last year, Guy Ritchie produced Sherlock Holmes (2009) with a titular character played by Robert Downey, Jr. and a new take on his persona. 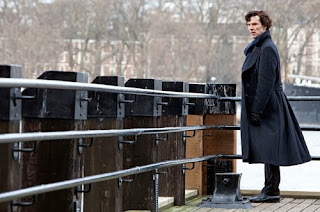 Now, is the show’s version of Holmes original? No, but he’s recognizable and fun.

Sherlock's title character is portrayed by actor Benedict Cumberbatch, a man with lips that belong to the statue of a Greek god. No, really, they were a major distraction. Every review I've read online talks about how hilarious Cumberbatch's name is which seems sort of moot when his acting is so convincing and his face is handsomely alien. I suspect he's an extraterrestrial from a gorgeous if strangely proportioned species from another world--a better coiffed world--but that is neither here nor there.

Cumberbatch was in the historical film Amazing Grace (2005) as William Pitt, which is no shock with a face that just doesn't seem to belong to this generation.

His sidekick, Afghanistan veteran Dr. John Watson, is played by Martin Freeman, who was the perfect Arthur Dent for The Hitchhiker's Guide to the Galaxy (2005). His performance as an average man innocently caught in a chaotic, would-be sci-fi epic was a joy to watch. Now he’s a slightly more-than-average man caught in the world of a super genius.

Freeman’s timing and heart-felt seriousness are all part of the comedy lurking beneath the surface of even the most dramatic moments in Sherlock. Freeman effortlessly plays John Watson as a pleasant everyman with a private taste for daring-do. He's as relatable as Sherlock isn't, the perfect entry character into the world of the show. 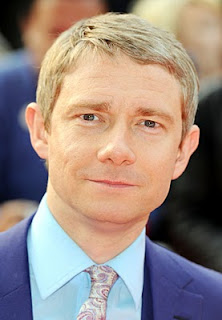 Freeman and Cumberbatch's chemistry is excellent, maybe even perfect. Their dynamic is far from sexual or romantic, but they fit together easily. "A Study in Pink" is also a loose re-telling of their first meeting much like "A Study in Scarlet," from Sherlock diagnosing Watson's veteran status from a glance to Watson offering Sherlock an audience the character doesn't know he wanted.

In a memorable scene in the back of a cab, as they pass urban London stores with wasp-wasted mannequins in the windows, Cumberbatch's Holmes describes step-by-step just how he deduced that Watson has recently returned from abroad, is seeing a psychiatrist, and has inherited a phone from an estranged sibling.

Freeman's Watson shares the audience's enjoyment in seeing the method revealed and says that that’s “amazing.” Holmes replies, in a line both hilarious and very sad, that most people just tell him to "piss-off." Their kinship is immediate and believable, the crown jewel of the hour and a half long episode.

This Holmes and Watson are outsiders in the modern world. Their bond is fresh and human. The wonderful connection between the actors, unfortunately, dwarfs the plot of the first episode and many other aspects of the story.

"A Study in Pink" is definitely suspenseful, with a number of supposed suicides around town believed to be the work of a serial killer. The only thing that links them is that they all took the same poison. The explanation behind it all is fun and isn't immediately obvious, but once it reaches its climax (which feels very close to a certain inconceivable scene in The Princess Bride [1987]), the mystery deflates.

Part of the problem is that Cumberbatch's character, during the final third of the premier, momentarily stops being a character and starts being a Crime Solving Machine (TM).

In the recent tradition of quirky, damaged crime show protagonists, as seen in Bones and House, Holmes now cheerfully describes himself as a high functioning sociopath. Misanthropy and super-human intelligence is part of the character, but he's a man, not an action adventure calculator. According to a less savory theme of Sherlock, the reason he solves problems isn't out of glorious human curiosity, but because he is a mechanism more concerned with crime than the victims of it. 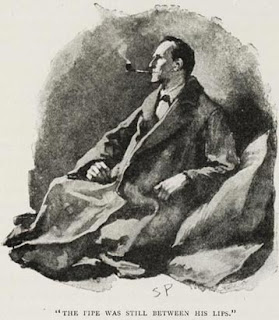 Some may argue there isn't much difference. I want to watch a character with a soul, though, not a function. I like cool heroes, too; Robert Downey, Jr.'s take on Holmes was more of a mainstream action man, which is probably why he rubbed some Sherlock purists the wrong way, but unlike Cumberbatch, Downey's character is endearingly friendly and warm. Cumberbatch's character is cold and only relatable when he's playing off Watson.

Considering that this is the first episode, however, it might just be an exaggeration rather than a permanent caricature. The 21st century, for example, certainly has smart phones, texting, and computers that do really cool things, but they are displayed in excess in "A Study in Pink."

I guess the story wants us to know it's conscious of how its source material has been transplanted.

Some nods are made to the devoted Holmes fan base, alive for over a century at this point. I suspect Dr. Watson's frequent pauses as he passes women are almost certainly due to humorous fan speculation that, while far from stated in the text, the character was a womanizer. Perhaps this attention to the fans is why the innuendo of two men living together is discussed so openly.

The producers seem to be in conversation with their audience, not just pandering to them with action adventure tropes. It's one of the saving graces of the show.

Posted by Gillian Daniels at 6:34 PM