Kelly Link is a being from outer space. Or beyond.

She comes to Earth, observes the follies of human nature, reads a whole lot of fantasy paperbacks, and writes down her observations. Then she publishes them under Small Bear Press.

Okay, Kelly Link isn't a spectacular alien intelligence from the stars (probably), but, to borrow an over-used-but-in-this-case-completely-deserved adverb, her short fiction is otherworldly.

Some short stories describe other countries, dimensions, and people; Kelly Link's fiction transports you inside the stories themselves. Her prose are completely habitable. Getting lost inside them is easy; I'm sure a reader could sustain himself on Link's elegance for months alone.

I first read Link's collection, Magic For Beginners (2005) several years ago. I was impressed by the parred down prose, the light horror, and fully three-dimensional characters.

Most of all I was completely blown away by how Link could sustain the most ridiculous ideas with realism and humor. A convenience store with zombie patrons? Sure, why not! A house infested by little people that might not be there? Sounds good!

Two stories from this collection, "The Faery Handbag" and the titular "Magic for Beginners," won well-deserved Nebula, Locus, and Hugo awards (yes, all of them) and are re-printed in Link's newest collection for all ages, Pretty Monsters (2008).

I recently decided it was time to read Pretty Monsters and Kelly Link's earliest anthology, Stranger Things Happen (2001) back-to-back in order to book-end the singular experience that was Magic for Beginners.

I discovered two wildly different short story collections deserving of praise, but writing a review where I simply gush about both anthologies wouldn't be entirely fair. In the midst of all that is engrossing about Link's short fiction, there are elements and pieces that are "only okay."

These "okay" works, however, outstrip many a competent author and are only obvious when comparing Link's work to itself.

I think one of the dangers in publishing a collection of fiction written over a long period of time are the conspicuous patterns that emerge. In Stranger Things Happen, main characters, specifically female ones, begin to blend together because, while individual, many appear to be cut from the same cloth.

Rachel Rook, from the memorable piece, "Water Off a Black Dog's Back," is the love interest of Carroll, a young man slowly discovering his lover and her eccentric family may not be as alienating as they appear.

But the stubborn and tight-lipped Rachel bears a striking resemblance to the romantic interest, Serena, in "Survivor's Ball, or, The Donner Party," a story about a young man named Jasper who accidentally crashes a mysterious party at a hotel. The dynamics of Carroll-and-Rachel and Jasper-and-Serena are nearly identical, with young, unsure men chasing after strange, possibly dangerous women.

I'm sure the fact both stories are about horror, paranoia, and the danger of getting to know people further connects them, but it's almost as if they're all aspects of the same people.

Kelly Link's early stories experiment with established mythology and fairy tale canons, showing an author with a knack for magic realism and "literary" fantasy still trying to find her voice. Stranger Things Happen bristles with strong and unsure characters who are often more comfortable in our world than a fairy tale one.

"Travels with the Snow Queen" is a re-telling of the Hans Christian Anderson tale about a girl trying to retrieve a boy from the clutches of a snow deity. The story quickly becomes an very obvious metaphor for problematic relationships.

"Flying Lessons," similarly, takes motifs, gods, and stories from Greek mythology and fuses them into the life of a young girl. Both work, for the most part, even if it feels uneven.

"The Girl Detective" doesn't. The story has great moments, especially when it becomes a re-telling of the fairy tale, The Twelve Dancing Princesses. It's also meant as an exploration of the "girl detective" trope in fiction, but only serves to describe a hollow, lifeless character. Unlike Link's other stories, where mystery provides a haunting atmosphere, this piece is just too vague to be palatable. Perhaps it's also weakened by being last and somewhat unremarkable in a very strong collection.

The best stories include "Louise's Ghost," a supernatural look at an intense friendship between two women named Louise, and "Shoe and Marriage," three inter-connected micro pieces that deal with married life, dictators, and a beauty pageant in the middle of Armageddon. Both works show Link's wonderful talent of fusing human fear and fantasy.

Among her most haunting stories, though, is "Carnation, Lily, Lily, Rose," a character study of a man who can’t remember his own wife’s name. He’s not even completely sure how he ended up at the hotel where he’s staying.

How does it end?

It doesn’t. A lot of Link’s early stories don’t end. Her short pieces are complete entities that often skip explanations.

Kelly Link is one of the rare authors who can write an ambiguous ending that doesn’t feel like it’s cheating the reader. In both Stranger Things Happen and Magic for Beginners, she leans heavily on ambiguity for dramatic effect. It works because the characters are so strong, if similar, it feels like they'll outlive the story.

In her newest collection, Pretty Monsters, Link tones this down. Most of the endings are fairly straightforward. This might be because Link is more sure about her craft or it maybe because this particular book is aimed at adolescents.

All of the short stories in Pretty Monsters have children and young adults as the main characters, with themes like growing up and change quietly sneaking in the background. I would even say they’re stories attempting to converse with adolescent culture. 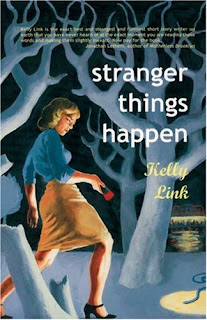 "The Wrong Grave," where a heartbroken poet tries to dig up his dead girlfriend, and title story, "Pretty Monsters," an interweaving of two seemingly unrelated accounts of monstrous teen girls, seem to be a response to the recent resurgence of teen-aimed gothic or “romantic horror” fiction. They’re not exactly part of the trend, but an exploration of why the light horror elements are so appealing.

"The Wizards of Perfil," one of the most memorable stories, seems like a tribute to Harry Potter and teenage-chosen-one fiction. The twist here is that the teens in question are being brought to a swamp in order to be the servants of the wizards in question.

Besides three stories, Pretty Monsters is almost exclusively about teen girls dealing with problems which, though intriguing, get repetitive. This imbalance is remedied with "Monster," a story of a boy, James Lorbick, trapped in a summer camp straight out of a horror movie, and "The Surfer," about a boy, Adorno, trapped in Costa Rica at an airport during a flu outbreak. Unlike a couple of the fun but somewhat interchangeable characters in Stranger Things Happen, James and Adorno are distinct.

"The Surfer"’s not too distant future setting of plague/flue outbreaks and a third-world United States appear to be built from headlines about swine flu and the terrible economy. In a lot of ways, it already feels dated. Characters as strong as Adorno, a teenage soccer player focused on going pro and unworried by alien-worshipping cult nudists, carry the story wonderfully.

It would be the strongest story in this tight collection if "Magic for Beginners," from Link’s middle anthology, wasn’t re-printed with the rest of the stories.

"Magic for Beginners," where Jeremy Mars obsesses about the best show in the universe, got me into Kelly Link. It convinced me she was far more special than most authors out there.

It's the sort of story that’s so well drawn, it could have been a full-length novel, but doesn’t need to be. It’s perfect the way it is––amusing, gentle, and fantastical while remaining firmly rooted in reality. It’s the perfect balance of Link’s trademark ambiguity and her honest depiction of human fear and love. Saying much else about it would ruin the well-crafted twists and surprises.

The short story also shows that Link’s middle collection is still the best of the lot, even if Stranger Things Happen and Pretty Monsters are well worth every word.

I’m passionate about Kelly Link. If she never publishes anything again, I would be miserable, but satisfied that at least she’s given the world these remarkable books.

Posted by Gillian Daniels at 1:52 PM