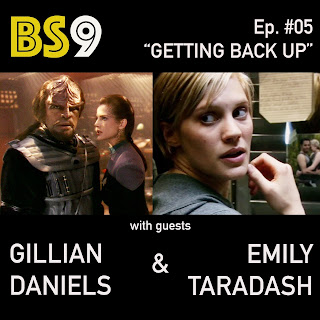 My friend and fellow playwright Carl Danielson just launched a podcast comparing episodes of Deep Space Nine and the reimagined Battlestar Galactica, BattleSpace Nine! And I'm one of the guests on the newest episode, BS9 Ep. 05 Soldiers of the Empire + Act of Contrition = ”Getting Back Up”.

Along with my usual joy of discussing media, I hope sci-fi fans will be interested in my defense of depressing, pro-wallow television when you're already bummed, my enthusiasm for director Julie Taymor's Titus (1999), the ways writers explore personal biases through fiction, my adoration for complex female characters, particularly one played by Katee Sackhoff, and the impact of Shakespeare. I'm really pleased I signed on for this episode.

Posted by Gillian Daniels at 6:56 AM