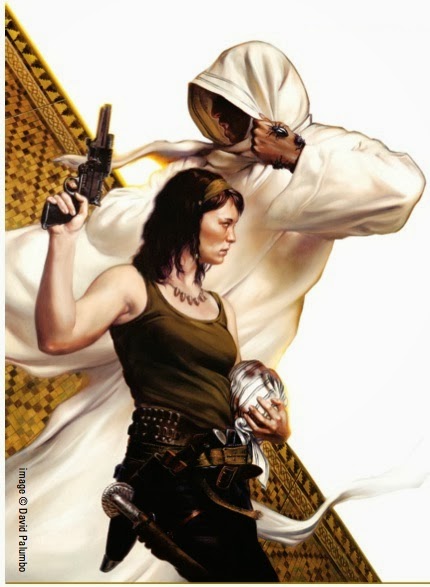 February slipped by quickly, as I figured it would.  So here we are, over a month later, and I thought I'd write a little bit about Boskone 2014 and how it all went.  Technically, the most recent con I went to was Vericon, an enormously intimate con which happened at the Harvard campus this past weekend, but I started this post prior to going there!

This convention felt a lot more relaxed compared to last year.  This turned out to be a nice, low-key affair.  I caught up with a number of authors both in and outside the area and generally was a lot less rushed than at Arisia 2014, a con which sold out on Saturday.

The first panel I attended was The Art of Writing Young Adult Fiction.  The panel was a pretty formidable one, rounded out with Strange Horizons editor Julia Rios and long-time writer, Jane Yolen.  My favorite takeaway in my notes was that, "A teen is not a characteristic" but an individual in another frame of life.  Also, I adored Yolen's story of how she accidentally traumatized her kids with a viewing of The Wizard of Oz.

Why You Want to Go to Florence is probably the least genre-related panel I've ever been to at a convention but it was still a lot of fun.  Jo Walton and Ada Palmer related anecdotes, both historical and tourist-ical, about the Italian city.  It reminded me of my own brief visit there on my high school Europe trip.  And now I want to save up to go back, a fact which makes me wonder whether or not Walton and Palmer are secret agents from the Florence Tourist Board.

Exploring the Whedonverse was the first panel I was on for this convention and I thought it went enormously well.  The audience was enthusiastic but not hesitant about criticizing Joss Whedon's past work. It was moderated by Stephen P. Kelner and I had the pleasure of being in the company of Dana Cameron, Nancy Holder, and Erin Underwood.

I saw Killer Plagues, a cheerfully grim little panel.  Seanan McGuire is, by the way, my tapeworm hero.  It was a nice mix of scientific inquiry and gory anecdotes.

The kaffeeklatsch with Jane Yolen was enlightening and I wish I had taken more notes with this one!  It was also just plain fun.

The Cinematic Landscapes panel I did with Bob Eggleton, Greg Manchess,  and Frank Wu was quiet.  I liked the conversation I moderated, but we all sort of wandered back and forth over the topic.  Lots of trivia about old films and a ringing endorsement for The Lego Movie (which I've since seen and can confirm is a real treat).

Fun With Seriously Silly Poses was a panel I was very nervous about.  It was an informal "posing" challenge in which I projected (cheesecake/beefcake) pulp novel covers on a screen and panelists John Chu, Mur Lafferty, Jennifer Pelland, E. C. Ambrose, and surprise special guest, Max Gladstone, attempted to mimic the poses.  They were all game.  I was so pleased.  The audience was sizeable, too, and were all too happy to provide extra props (a cane, a stuffed dragon) and extra bodies.  We had a lot of fun with gender swapping the covers, as well, which pointed out just how awkward some of the female-oriented poses could be.

On Sunday morning, I caught the Theodora Goss-moderated panel, A Literary Wonderland, which, like the panel she moderated the night before, The Enduring Power of Fairytales, explored modern folklore, Alice in Wonderland, and the stories people tell their children and themselves. Lots of lovely stuff here.

Bob Devney, who's an absolute sweetheart, moderated Against a Dark Background: Looking Back at Iain M. Banks.  I was on that panel echoing the sadness of Banks' sudden death this past year and enduring quality of his works.

Who's in the Attic, What's in the Basement, and I Don't Know Is Under the Bed was the last panel I was on for the convention.  I moderated it, but our discussion of horror tropes in contemporary film and literature was lost to the sleepy haze of the convention's last few hours.  It was nice, but I wish we had had more time to delve into monsters and the things that terrify contemporary audiences.

All these panels were sandwiched in between meal outings and drinks with friends and con-goers.  I also got to catch up with one of my Clarion teachers, Elizabeth Bear, which, as always, was an absolute delight.
Posted by Gillian Daniels at 1:54 PM