Warning: Talk Show Violence and ANOTHER Post about Harry Potter

When we look back at the Harry Potter films in the next couple decades, I'm not sure we'll think of them as good adaptations of the books. They're very rushed where a mini-series (or several mini-series, ahem) probably wouldn't be and they often stumble with their CGI where an animated adaptation wouldn't. 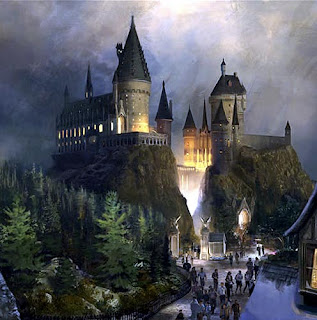 I know I'll certainly remember the Gothic sensibility brought to the series. Hogwarts Castle always looked like a dark, winding place with shaded courtyards and chilly hallways (possibly just "courtyard" and "hallway" as viewers were probably treated to the same locations from different angles many times).

The books and movies were also pretty twisted and scary, now that I think about it. Schoolchildren move from a boring outside world to an enclosed, safe fantasy palace that gets progressively less enclosed and safe as the story goes on. The main character deals with newly heightened danger in each volume.

Is it so strange that an actor from the movies ended up developing a slightly macabre sense of humor?

Or, judging by Radcliffe's enthusiasm for his role in Equus (yes, I saw it when I was in New York; he was good), perhaps he's always found guts and gore wonderfully funny and we've all been too blinded by his squeaky clean version of Harry Potter to notice.

Regardless, I think the actor's got a unique career ahead of him even if that head might be missing.

(You totally didn't see that pun coming. I just know it.)
Posted by Gillian Daniels at 12:00 AM