The Bleakest of Webcomic Comedies (Part 3) 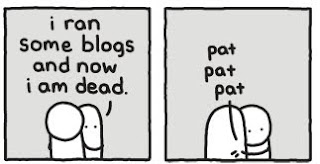 John Campbell's Pictures for Sad Children, the last entry in this abbreviated list, takes a minimalist's approach to the miseries of the world.

His characters are often indistinguishable from another beyond hairstyles, unless you're the sheet-wearing Paul, who is a ghost. More recent comics, as of 2010, have experimented with this style, but the simple lines and shapes have already become as a part of Campbell's art as a thumbprint.

His stories deal with depression in an upfront way. His territory feels unique. He treats molestation, first world problems, and lazy roommates in a casually in a way that can't help but put high-light the horribleness of each problem.

Reading Campbell's work is both delightful and nerve-wracking. He grabs the reader by the guts

and doesn't let go, not even if they struggle. My recommendation? Don't struggle. Let the desperation and paradoxical humor of each panel sink in.

I'm not going to ask how he squeezes so much empathy out of viewers for characters with circle-heads and dots for eyes. I think Scott McCloud talks about identifying with simple shapes in the much loved Understanding Comics. Charles Schulz was so successful at it, Peanuts is the most widely run newspaper comic in the world, and he's dead. If that's not success, I don't know what is.

Even by the school-children-who-are-horribly-unlucky standard of Peanuts, though, Pictures for Sad Children is pretty bleak. It flaunts it right in the title. Even outside the confines of the Internet, John Campbell likes to talk about the things that make you sad and uncomfortable. Just check out some images from an art show he did this past year.

Humor has the most potential to be one of the most honest mediums out there. Why, online, are funny webcomics mainly about gaming? There's a whole human condition to poke, weep, and laugh about. I guess that's why the really skewed but funnily sad (sadly fun?) comics stick out so much. 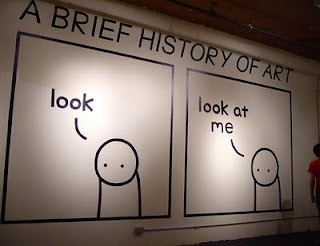 Posted by Gillian Daniels at 12:00 AM