The Problem of Owen

I am in a Conundrum.

I've finally gotten around to Doctor Who, an excellent British TV show that's been on (and off) air since the early 1960's. It's fun and beautifully written and I am having a great time watching it. It's science fantasy at its best, with a magic man, his blue police box, and all of space and time as his playground.

So, while combing through the 2005 reboot of Who, I decided to revisit its spin-off, Torchwood. I was first exposed to the series less than a year ago and couldn't remember why I had put off seeing more of it. 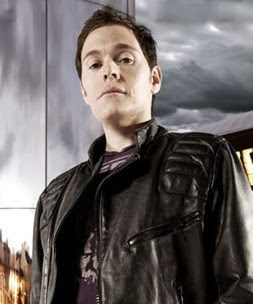 All right, the premise of Torchwood is solid, with a cast of folks dealing with aliens and other monstrosities in Cardiff, Wales. The tension is fantastic, the effects are neat, and the main character, Captain Jack Harkness (John Barrowman), is dashing as hell.

Also, because it's made for slightly more adult audiences than Doctor Who, there's some wonderful implications of bed hopping.

So it looks and feels like a series worth watching, following, and obsessing over into the wee hours of the morning.

Then there's Owen Harper (Burn Gorman), one of the most unbearable characters I've ever seen on screen. He's the doctor of the group and is meant to be somewhat obnoxious. Unfortunately, he's not the sort of obnoxious doctor that's fun to watch. In his first appearance, he uses alien technology to make a girl (and her boyfriend) become so attracted to him, they sleep with him.

It's creepy, rape-y (or, okay, just plain rape), and, worst of all in the land of fiction, can't be dismissed with charm. Owen doesn't have any. He badgers, whines, and hasn't done anything remotely useful beyond being in the right place at the right time.

I don't demand characters who are paragons of virtue, but Owen makes otherwise fun scenes nail-bitingly difficult to watch.

Compared to Doctor Who, Torchwood has comparatively few episodes and could probably be polished off in a matter of weekends.

Until I find an answer to my problem, beyond putting my fingers in my ears and humming loudly every time the character is on screen, I'll either have to stick to Doctor Who or learn to love hating a really hate-able character.
Posted by Gillian Daniels at 10:54 AM