The Bleakest of Webcomic Comedies (Part 1) 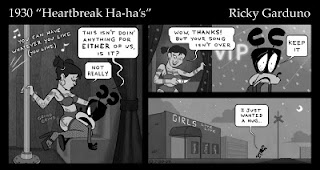 Dumm Comics, as of January 13, 2010, hosts five different artists and their creations. Of the current line-up, only one webcomic updates three times a week, give or take a few guests: Ricky Garduno.

His comic, Nightmare Theatre, is a pastiche of cute retro-designed characters who do awful, awful things. Kimbo SnugglePupp, his friends, and the various incarnations that switch between the early twentieth and twenty-first century, regularly indulge in Lovecraftian sacrifice and vicarious murder.

They also get their hearts broken, as evidenced in the above comic.

Garduno doesn't only pull humor from blood and guts but a deep, private sadness. The mood varies between comics, keeping Nightmare Theatre one of the most involving and popular of the Dumm set.

The artist keeps the story loose, giving him plenty of room to vary his material. He's not shy about including his opinions on culture or painful personal anecdotes. Kimbo, the dog-like main character, is malleable. He can be a self-insert for the cartoonist's views or a fully formed lunatic with his own problems. (NSFW) 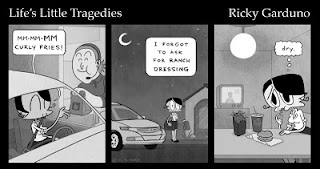 Yes, many of his comics are not safe for work or, well, not safe for life. That's part of the fun, though. The Depression-era style and violent/scatological humor just barely mask a thoughtful look at insecurity and misery.

Yeah, there's cannibalism, dark arts, and mayhem, but Nightmare Theatre remains a work of love. That love may be inspired by the hilarities of perversion and misery, but it's love none-the-less.
Posted by Gillian Daniels at 8:00 AM