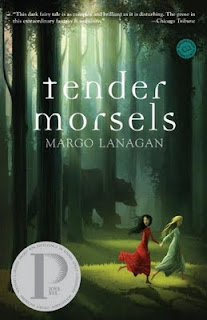 Tender Morsels, an adaptation of the fairy tale Snow White and Rose Red, begins with fifty or so pages depicting domestic abuse.1

And shockingly, it's a wonderful read.

The story begins with a young girl, Liga, as she endures molestation by her father, resulting in several unwanted pregnancies. The depiction of her isolation and emotional state are bleak but affecting. The audience is never exposed to the more unsavory details of Liga's traumas, which is perhaps why the scenes are never as off-putting as they could be.

We are right there with Liga when she resists her father's urgings to abort her most recent pregnancy. Her logic, in this pre-industrial, superstitious world, is oddly sound: she wants the companionship of a child. Liga's father soon perishes, allowing the girl to have her child, but she is abused yet again by a band of vicious boys from her village, resulting in both another pregnancy and her departure into another world, a personal heaven/fantasy land bestowed on her by a benevolent force of some sort.

Which is where the story of Liga's daughters, Branza (Snow White) and Urdda (Rose Red) begins. Unknowingly, they grow up in their mother's idea of a perfect world, where villagers are friendly automatons, poverty is non-existent, and men don't abuse women. The elder Branza is content but Urdda, correctly, suspects there is something beyond this oddly bland reality. Her suspicions are proven sound when men and bears from the real world begin to intrude on Liga's personal heaven, soon forcing all three women back into reality.

Tender Morsels is a tough book to digest only because of its subject matter. Thankfully, the drama never overwhelms the text. The language, where characters refer to children as "babbies" and the character voices are individual and involving, flows smoothly.

Liga's abuse isn't utilized to force tears out of the reader but to develop the world around her. Fantasy narratives, especially those set in time periods resembling the dark ages, often sidestep the question of gender divides in a patriarchal society. Tender Morsels turns the question of gender into one of its central themes.

If this crime against Mam had gone unpunished, who knew what else had been done? If no one spoke of this, from guilt among the men themselves, from distaste and fear on Mam's part, who knew what other secrets bubbled here? The whole town, the whole world, was fouled by this, was made unclean, to Urdda's mind. (Lanagan 388)

Zelazny's Lord of Light deconstructs the power of religion just as Lanagan indicates the stifling history of patriarchy. The commentary is unsparing

But the story is too well written to preach. The unsavory sides of a male-dominated society do not force the story into having a moral. Instead, Liga, now older and removed from her father's influence, must realize that hiding away from the real world has caused perhaps more harm than she intended. Slipping into a fantasy realm has saved her from abuse but has also sheltered her and her daughters from experience.

Perhaps this theme of reaching adulthood through experience explains why the book was marketed to general audiences in Australia but labeled for young adults in the U.S. Every character has to learn how to grow-up and adjust to the real world.

So, is this book good, fun, both, or neither?

While it's not very fun to begin a story where the main character is being abused, the language is a joy to read. I often steer clear of fiction built around domestic violence, as such books often come off as exploitative, but the author keeps descriptions light and her focus steady. As the audience, we know things will get better. One need not stretch their patience very far for the narrative to brighten up considerably.

Saying this, however, the first fifty pages are so well written, they often overshadow the rest of the book. The adventures of Liga's daughters, Branza and Urdda, as well as their interactions with bears and witches, are somehow flat in comparison to the first section of the story.

When the three women leave their heavenly home in order to return to reality, the conflict begins anew as they try to acclimate to the world around them. Beyond a chilling climax, though, the story continues to lose steam until its finale. Perhaps some passages could have been cut or some pacing issues could have been solved before release.

Reaching the ending remains deeply satisfying. I highly recommend it to audiences who enjoy revisions of fairy tales and fantasy fiction.
Posted by Gillian Daniels at 7:44 PM