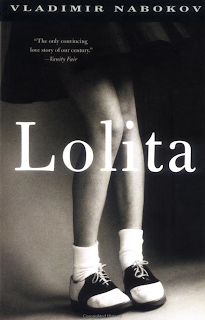 What the hell is up with covers for Lolita?

In Nabokov's beautifully written novel, a middle-aged narrator whose name might be Humbert Humbert (very important: everything is from his perspective) recalls his lust for a young girl. He goes as far as to marry the teen's mother in order to get close to her.

But the audience is meant to recognize the fact that Humbert has fallen in love with the image of a young girl and not an actual person.

So why do most covers for this book promote Humbert's version of the character? Why does the quote from Vanity Fair on the black and white cover above claim Nabokov's narrative is "the only convincing love story of our century?" I hope the writer who gave that quote meant "convincing" in the sense that Humbert is truly in love with his own idea of Lolita. Maybe Vanity Fair was just trying to be edgy.

Also, a quick note: to those familiar with Japanese fashion, Lolita is a fashion movement where women dress in exaggerated, Victorian-inspired frills, bows, bloomers, and (often) long sleeves. While Japan has a long history of finding sexual appeal in innocence and youth, its appropriation of the "Lolita" idea is very broad in this case.

Anyway, covers to books can often be misleading (or even hilariously bad), but a number of covers for Lolita side with Humbert from the beginning. This is deeply troubling if only because a successful cover tells the reader what the story is about rather than broadcasting a preconceived notion of characters.

Take a look at this gallery on Flickr. How many of these interpretations for Lolita, while very well done, reference the fact she's actually being objectified? Some of these covers show a young woman aware of her sexuality and in control of it, which is definitely Humbert's view the character. Very few covers portray a victimized girl being controlled. Most are ambiguous.

Lolita, the very few times the character emerges from Humbert's definition of her and when she becomes human, is shown to be fairly detestable. When not enraptured by her image, Humbert explains to the audience that she is a tease, temperamental, and childish.

Which I guess is pretty shocking to him what with her being a child, and all.

These descriptions feed into the idea that Lolita is sexually active because she is spoiled. Humbert, in showing that she does not meet his ideal and is in fact very flawed, lessens his crime. In his eyes, she is goading him into sleeping with her.

But this is his perspective of the events and not the only perspective with which one can read the book.

Humbert is delusional. He portrays himself as a suave foreigner and the women who do not meet his standards as fools or idiots. He describes Lolita's mother as an "old lady," but is this because she's actually old or because she's his idea of old?

In the memoir, Reading Lolita in Tehran, author Azar Nafisi writes about an Iranian student's feelings toward the book:

'[S]ome critics seem to treat the text the same way Humbert treats Lolita: they only see themselves and what they want to see.' She turned to me and continued: 'I mean, the censors, or some of [Iran's] politicized critics, don't they do the same thing, cutting up books and re-creating them in their own image? What Ayatollah Khomeini tried to do to our lives, turning us, as you said, into figments of his imagination, he also did to our fiction. Look at Salman Rushdie's case [regarding The Satanic Verses].' (Nafisi 50)

Humbert's voice is so persuasive in objectifying the titular character, audiences and illustrators forget Lolita is his victim. Sexualizing the character in cover art plays into Humbert's vision of her. I suppose it can be argued, though, that some of the book covers depict Lolita as a sexual being on purpose.

The narrator's pedophilia (which he carefully replaces with the phrase, "obsession with nymphets") is what makes the story so intriguing. Yet the book is still about a man who, aided by his inner demons, takes away the childhood of a young girl by committing statutory rape and turning her into an object. Nobokov's genius is that he makes this supremely horrible human being into a sympathetic figure.

Part of the story is how the narrator manipulates the reader into taking his side of the situation. Lolita, after all, doesn't have a voice. The character is never not defined by Humbert. We often see her as a willing accomplice to Humbert's imagination because he's the one telling the story.

When a reader or artist completely agrees with Humbert's perspective, he or she falls into a carefully laid trap.

I'm sure I've ranted about this subject another time and on another blog in the past, but every time I see the image at the top of this entry I am reminded again of how misleading cover illustrations can be. The image shows a girl with very adult legs, her shoes innocent and nostalgic of another era but her skirt at a height that tells readers she does not desire to be innocent at all.

But this is Humbert's desire, not Lolita's.

Posted by Gillian Daniels at 1:14 PM