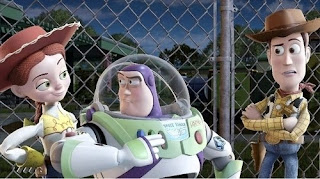 Pixar may be renowned for bringing computer animation into mainstream film with Toy Story back in 1995, but the company has mainly done well because of its stories.

Toy Story 3 succeeds because, once it conjures all of the nostalgia from its predecessors, it hits you with the awful truth that was always lurking behind the first two films:

Now that Andy (John Morris), who owned the living toys in the first two films, is about to go to college, he has to get rid of them as he cleans out his room. Woody (Tom Hanks) and Buzz (Tim Allen), who are practically mascots of Pixar, are suddenly, nakedly disposable.

The film goes into some very dark territory despite being one of the most visually sumptuous and playful of Pixar's full-length features to date. Sunnyside Daycare, where the toys are initially sent, is filled with bright color and varied textures unseen in the previous films. The detail within the nursery is extensive and pure eye candy.

The original Toy Story mainly played with light. The limited technology of the time may be the reason why the writers decided to focus on toys rather than jerky, uncanny valley humans. The first film, though, was still able to give us the hellish bedroom of Sid, the evil next door neighbor who makes a brief cameo as a garbage man (note the skull shirt) in the most recent installment.

The neon and plush toddler toys at Sunnyside are ruled by a stuffed bear, Lotso (Ned Beatty). Even young children (one of whom I went with to see this film for the second time) should pick up on the fact he's the villain by his entrance alone. Beyond this, the film spends very little time pandering to its target audience.

In one scene, when the toys discover their fate is finally out of their hands, they have nothing to do but wait for the inevitable. It's an adult moment in a film intended for not only today's children but those who grew up with this trilogy. The scene is not about the beautiful animation Toy Story 3 offers; it's about the affecting story behind it.

Regardless of whether or not you grew up with the films, I think Toy Story 3 is probably going to be one of the strongest films in theaters this year. It will definitely net Pixar a few more awards.

But what should the company do next?

The opening short to the film is called Day and Night where 2-D animation is effectively married to the usual computer generated fare. I wouldn't mind seeing Pixar have a go at a full 2-D animated feature, just to prove it can make an effective story no matter the format.

We open with a writer.

He is trying to write something very important, but the words aren't coming out right. He throws out notebook pages and scratches out entire paragraphs.

In his mind, Benjamín Esposito (Ricardo Darín) sees a woman running along a train and a man looking out the window after her as he leaves the station.

Is it fiction? A memory? If it's a memory, whose is it?

It's a killer opening to a good story.

Most of The Secret in Their Eyes takes place in flashback as Darín's character struggles to remember the details surrounding the brutal rape of a banker's wife in 1970's Argentina.

He is aided in his investigation by his office crush, Irene Menéndez-Hastings (Soledad Villamil), an Ivy League lawyer who longs to bring the criminal to justice. Both actors have an excellent chemistry that does not get in the way of their hard boiled detective work in the past.

In the present, their emotional connection becomes the calm center of a violent tale.

Years later, Benjamín meets with the much older Irene while he tries to turn the events surrounding the crime into a novel. The complex tale is sometimes sprawling in its cast and setting and is sometimes focused sharply on mundane, ordinary things that turn out to be of key importance to the story.

I usually avoid stories about writer's writing, as they often feel self-referential, but Benjamín's novel is secondary to the action of the world around him. The novel is his attempt at excorcising a particularly nasty string of events from his mind.

The subtitled film is beautifully shot and has brilliant moments of interaction between the characters. There are scenes where the movie drags, though, like a particularly labored episode of Law and Order, but when it's good, it's perfect.

Details of the 1970's–soccer matches, the politcal climate–warm the film up from a cold, violent mystery into an engaging period piece. The final act turns the movie on its head, transforming the story into something more affecting than a struggling writer trying to find the right words.

Creature features tend to be cautionary tales: "Don't fuck with science because it will fuck with you." Splice exploits common and misunderstood fears of cloning and stem cell research into an effective story, at least.

Our heroes are Adrien Brody and Sarah Polley, a scientist power couple. Their discoveries include slug-hybrids which make moist, gushing sounds whenever on-screen.

"NO GOOD CAN COME FROM THIS," the film all but screams.

In their world, I guess Brody and Polley are so hip and cool, they hang posters of anime characters on their walls, listen to heavy metal and jazz, and have made it onto the cover of Wired. These character flourishes confirm that Brody and Polley's characters, despite their breakthroughs, still have a very juvenile attitude toward life.

Their teenage passions are challenged when they introduce a third character into their life, a creature far more complex than a meaty, gooshy slug.

Mushed together from human and animal DNA, the CG and puppet rendered monster is a lovely young woman with a bisected head, goat legs, and a tail. It grows quickly, a child maturing into the attractive Delphine Chanéac.

Dren, as they name the creature, becomes resentful of her adoptive parents, who lock her away from the world.

Splice's careful sci-fi family drama falls apart in its third act as it becomes the very creep-fest its posters promise. There are some clunky lines, too, that become far more jarring as the film draws to a close.

The thoughtful, strong, and emotional build-up in the first two-thirds of the movie are worth the price of admission, earning an "A" where the last fifteen plus minutes of the film earn a "D."

Brody, Polley, and Chanéac give excellent performances, even if they're stuck in a world where scientific advancements only mean trouble.

(My full review of Splice is available at Vivacious Kids! It's a cool blog! Go check it out!)
Posted by Gillian Daniels at 4:00 AM