2021 Publications: A Year in Review 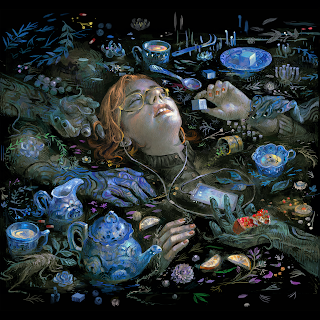 It's been a busy year. I'm really proud of the stories I've published. They're now eligible for 2022 awards.
"King Moon's Tithe to Hell" is about a woman, another woman, the land of Faerie, and a journey to Hell. Also, far more terrifying, commitment. It's my first work of prose accepted by Lady Churchill's Rosebud Wristlet and is in their June 2021 issue.
"House of Wolves" is about the "found family" trope but also I wanted to explore its potential toxicity. I'm so pleased Kaleidotrope put it in their Summer 2021 issue and grateful that it was accompanied by some lovely art (right) by Cindy Fan, "Tea Time."
"Here is the Girl Ghost" is a ghost story set in a house that's a lot like the one I live in now. (Okay, I live in an apartment in said house, but still.) It features memories I have of visiting France. I'm happy it has a home in Mirror Dance, July 2021.
What a pleasure to have my queer, dysfunctional vampire romance, "Frost Bloom" in Nightmare Magazine, September 2021. It's my first short story in Nightmare and my first in a John Joseph Adams publication. What a thrill!
Posted by Gillian Daniels at 5:00 PM