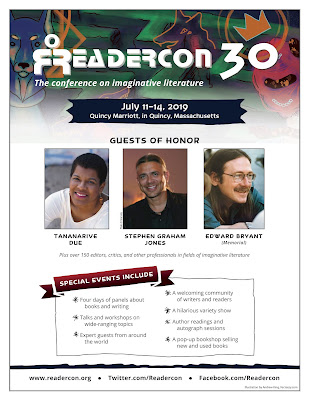 In a little over a month, Readercon 30 will be upon us! It's July 11-14th at the Quincy Marriott.

I hope you're ready for a con where I'll mostly be talking about horror, because horror is the order of the day!

The Horrors of Being Female
Gillian Daniels, Gemma Files, Gwynne Garfinkle, Arkady Martine, Kate Maruyama (mod), E.J. Stevens
Fri 3:00 PM, Salon 4
Horror and dark fiction frequently reflect the everyday indignities and dehumanization of women living in patriarchal cultures—especially women who are also minorities. For example, GOH Tananarive Due writes about the fears of black women, while Caitlín R. Kiernan and Shirley Jackson depict the stigmatization of mentally ill women in ways both overt and subtle. How can authors find ways to describe the terrorizing of women without crossing over into objectification? What makes these works resonate with, and even empower, women readers?

Fascism as a Genre
Gillian Daniels, Ruthanna Emrys, Paul Levinson (mod), Kip Manley, Howard Waldrop
Fri 5:00 PM, Salon 4
Many thinkers have approached fascism as storytelling. In 1936, Walter Benjamin wrote, "The logical result of Fascism is the introduction of aesthetics into political life." Umberto Eco's 1995 essay "Ur-Fascism" considered this approach. And in 2018, Nick Harkaway tweeted, "Part of the danger of Fascism is that it's less an agenda and more a style." How can the lens of genre help us understand and combat fascism in the present era? What would anti-fascist aesthetics look like, and how can we write them into speculative fiction?