I'm going to be a part of Boksone 54! I'm really looking forward to it and I hope you can join me.

Also, THEY GAVE ME A READING THIS YEAR. WOW.

Buffy was just a teen TV drama about a bunch of vampire-hunting kids ... or was it? Let's consider the friendships, the dialogue, the rule-breaking, and the characters. How did these aspects of this 1997-2003 show, individually and combined, help to change viewer expectations — and the very ways we think about episodic storytelling today?


The Magic of Magical Realism in Literature

The genre of magical realism is often defined by contradiction: bringing an acceptance of magic into the rational world — into our world. Does this really make it different than fantasy? What is it about the work of Gabriel Garcia Marquez, Jorge Luis Borges, and Alice Hoffman that makes their stories stand out? Our panelists share the stories they love, why they love them, and what else we should be reading.

We'll look for and at the best stories that take place on the fringe: stories in which the living and the dead intersect, bringing out the drama, tension, and atmosphere that are the hallmarks of a well-told ghost story. (One darkly shining exemplar: Shirley Jackson’s The Haunting of Hill House.) Join us for an unsettling discussion of what makes a good ghost story great, and why some tales become enduring classics while others ... don't.


Science Fiction on the Stage

You can't do that on the stage! ... Can you? How do you create a space ship going Warp 5 on the stage? Can you really produce a true SF feel without the flashy special effects that people have come to expect? What kind of opportunities are possible when it comes to writing and producing speculative fiction on the stage rather then in film or in print? Moreover, how do you get started writing for the stage?

It's shot on locations worldwide and produced by the creators of The Matrix and Babylon 5, yet this Netflix TV original has largely flown under the radar. (Still, season 2 starts in March.) Panelists examine the intricate storytelling and dizzyingly diverse connections of this sens8tionally groundbreaking SF show. From gender, race, and religion to the struggle of coming to terms with one’s identity, Sense8 treats its subjects in ways network television would never touch. SPOILERS ABOUND for nonviewers, but why not sneak a peek anyway? 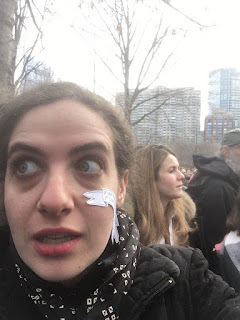 Yesterday, I participated in something huge, potentially generation-defining.

Well, "generation-defining" if we keep up the momentum.

As I write this, participation at the Women's March across continents has been estimated as high as 2.5 million. People are angry, disheartened, and unsure of the future.

But the outpouring on Saturday was so warm and hopeful. People really want to make a difference. It was a moment of solidarity and warm fuzzies.

It was great to hear Elizabeth Warren speak, even though there were too many people to properly see her. Ed Markey was enthusiastic and Maura Healey 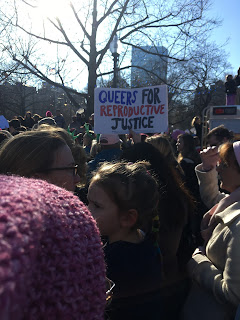 There's work to do.

Despite having speakers and organizers of racially diverse and indigenous backgrounds, this march and others seemed to center on white women. As a white lady, yeah, I admit we're the majority, but we also have to make sure we're not dominating the narrative of who stands to lose the most the next few years.

My hope is renewed and so is my commitment to change and a better, safer future.
Posted by Gillian Daniels at 4:27 PM