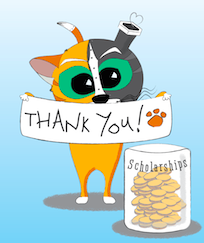 The Clarion Fantasy and Science Fiction Writing Workshop changed the course of my life.

Okay, it began by changing the course of my writing life, but the waves of that swept through my life in general, too. I participated in the workshop exactly five years ago in 2011. Holly Black and Neil Gaiman had both tweeted about it with a certain sureness, which caught my attention. I had just graduated college without a clear idea of what to do next. I questioned a lot of things about myself, where I lived (with my parents), my job, and whether or not I should continue to write.

While the program doesn't guarantee everyone will come out an award winning writer--nothing can do that--a lot of award-winning writers have gone through Clarion. The "magic" of it, I'm convinced, is simply the act of being locked away with like-minds telling stories for six weeks.

Whatever happened while I was there, it changed something in me. Since then, I moved to Boston, published sixteen short stories and poems, finished a novel, and have pushed myself harder each year, each story to become a better writer. It took me from a dark funk into a brighter, more challenging world.

One of the things that helped me get there was a scholarship. This is a workshop that should be accessible to a lot of people. Raising money for it is a little different than asking people to contribute to my patreon, which is going to be around for a while and is meant to benefit my own work.

This year, I'm competing in the Clarion Write-a-Thon to raise money for the program from June 19th to August 2nd. Please contribute! A kind donor has already sent me funds while I try to hit my lofty, 50,000 word goal, but there's still time!

Posted by Gillian Daniels at 9:11 AM