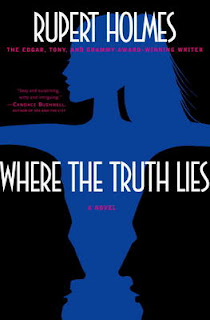 I picked up Jerry Lewis's autobiography, Dean and Me: A Love Story (2005), not because I'm an avid memoir reader but because I'm a fan of period pieces combined with humor. Also, balancing my literary diet with an autobiography was sort of a plus.

I also thought of Harpo Marx of the Marx Brothers and his wonderful book, Harpo Speaks (1961), which I highly recommend. It's one of my favorites. Harpo's memoir is entertaining, but doesn't skip on the details of an impoverished childhood in show business. I hoped for the same of Dean and Me, a story that mainly centered on Jerry Lewis and Dean Martin's famous comedy-musical team of the 1950's and its -up. Despite the material, it just didn't engage with anyone outside of its core audience.

I'm almost 100% sure Harpo Speaks was written with a lot of exaggeration. It's entertaining because it embraces the sweet nostalgia of a life and career that was probably a lot harder than it looked. Dean and Me, on the other hand, in describing all the mechanics of a two-man act and stopping only to reminisce on a dissolved friendship, feels pretty incomplete by comparison. Jerry Lewis's book just couldn't sustain its anecdotes with truth alone.

Where the Truth Lies, where a thinly veiled Jerry Lewis and Dean Martin become the center of a murder, is ultimately more satisfying because it is fiction.

Rupert Homles's crime thriller masterpiece brims with detail. Did he research every moment? Is every 1970's first class airline meal or theme restaurant scene completely reliable? Maybe Holmes is just drawing on blurred childhood experiences. It doesn't matter, certainly not within the context of a truly elating chapter involving a trip to a Disneyland of long ago.

Its love letter to the past, but it's still a crime story. K. O'Connor, a spunky journalist with an eye for detail, narrates her experiences with singer-actor Collins (inspired by Dean Martin) and comedian Lanny Morris (probably pretty close to Jerry Lewis) as she tries to compile the former's biography.

Like their very real counterparts, Collins and Morris are well known for their team-up in the 1950's. Unlike them, however, their relationship sours when a dead woman turns up in the bathroom of a hotel room reserved in their name. The theories behind what made their act work so well--a brotherly relationship possibly viewed by the audience in a homoerotic-subtext--makes for compelling reading during the course of the story. Details of their fall-out compromise the juiciest revelations of the third act.

Dean and Me describes what became of the real entertainment duo's careers with comparative dryness. Martin and Lewis were simply burned out, two show-biz giants ready to move on to other things. It's a boring ending to a legendary rise to fame, but its honest.

And honesty can be unsatisfying.

When I first picked up Where the Truth Lies, I was initially put off to what I thought was a bland title. Within the context of the double-meaning of "lies," however, it's very descriptive. The best--or, well, most entertaining--sort of truth in fiction is mainly the kind that's been embroidered with a few falsehoods.

Both, but the style takes some getting used to. It's very compact.

Holmes wants as much of the early seventies in the book as possible. If you love a good deal of description in your suspense, than you've found the right story; if not, I would still hesitate before skimming. Not only are some details are just too important to miss, the prose are often sumptuous.

The story begins to strain believability as it barrels toward the conclusion, but the ending is still fantastic. Recommended.
Posted by Gillian Daniels at 6:07 PM