Not Satanism but Transformation 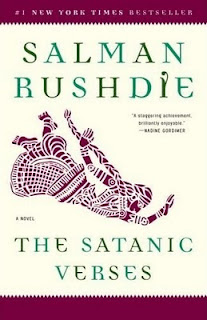 Two men fall out of the sky from a hijacked plane that explodes over England. The men are the optimistic Bollywood actor, Gibreel Farishta, and the far grumpier India-to-Britain transplant, Saladin Chamcha, a voice actor whose identity remains mostly unknown to his Western audience.

Instead of plummeting to their doom, the men fly.

A beautifully written narrative unfolds from there, chronicling each actor’s attempt to acclimate to Britain after this experience. Rushdie’s rambling, warm voice keeps the characters and events interesting whether he’s writing about saints or Satan.

Salman Rushdie’s The Satanic Verses, like The Devil’s Arithmetic and The Screwtape Letters, has a title that incites many potential readers to say (or think), “Oh yes, that sounds really scary, maybe I’ll read that later,” knowing from public knowledge that there is something infamous attached to the book in question but unsure what exactly that is.


The reputation of Rushdie’s Satanic Verses has less to do with its title than the fatwah issued against it by Ayatollah Khomeini is 1989. The ban has survived for quite a long time despite Khomeini’s death and the accepting attitude of certain individuals in Muslim nations, but it remains none-the-less, overshadowing more important themes of immigration and forgiveness. In many ways, author Salman Rushdie’s career has been overshadowed as well. After reading the book cover to cover, I wonder if Khomeini feared the book’s exploration of the West more than its dissection of the Koran.

Parallel tales run along the main story, including an ill-fated pilgrimage that openly questions the validity of faith and a city where a whorehouse has prostitutes that model themselves after Mohammed’s wives. If Rushdie’s intent was to stir up a little controversy over two decades ago, his only crime is he succeeded far too well.

The novel’s main focus is on nationality and identity. The novel explores whether Saladin’s British wife and career mean he is no longer Indian or whether Gibreel’s good fortune means causing others harm. Religion and the questioning of it certainly makes up a good part of the novel, but in many ways it’s a red herring in finding the purpose of the narrative. Saladin and Gibreel are on an odyssey of self-discovery more than anything else, even when one man transforms into a demon (shaytan) and the other an angel.

“That sounds like a very nice book,” you are probably saying to yourself. (Or maybe you are thinking that it sounds dreadful; I can’t tell.) “But isn’t this a review? What do you think of it?”

Well, I think a lot of things about the story and its analysis of the intersection between Eastern and Western cultures, but I fear I would mostly end up repeating much of the book verbatim and that certainly isn’t what a blog review should be about.

Instead I’ll give it a

A good book, at its best, reframes the world and returns to the reader’s thoughts days after he or she has put down the text in question. A good book can still be “fun” but in an academic and challenging sense. The journey isn’t always viscerally pleasant, but it’s a healthy dose of literature, reality, or sense.

A fun book, on the other hand, is, at its best, an escape hatch from the world. It’s dessert before dinner or ice cream for breakfast. It doesn’t have to be believable, just convincing. A fun book is “good” in the sense that it successfully transports you to an imaginary vacation spot where thinking is often largely optional.

What is The Satanic Verses, exactly?

In one scene, one of Rushdie’s heroes attempts to come up with a philosophy to explain the recent twists in his life. “Maybe unhappiness is the continuum through which the human life moves, and joy just a series of blips, of islands in the stream,” Saladin thinks to himself (Rushdie 531). The book quickly moves on to other subjects, being the far-reaching, thoroughly populated odyssey Rushdie likes to write (if Midnight’s Children is any indication).

The above line remained with me through the rest of the text, though. Rushdie and the reader see one unhappiness after another: suicide, the dissolution of marriage, and unforgivable crimes. Gibreel and Saladin may survive falling out of the sky, but that’s only the beginning of their troubles. Literature isn’t very compelling without conflict, though, and the characters always suffer for a (sometimes self-inflicted) reason.

Tragic events in the novel are contrasted with “islands in the stream” that make certain quiet moments all the more satisfying to read:

A heartless bussinessman has a secret passion for carpentry.

A hospital filled with dehumanized but fantastical patients makes an escape for the real world.

A father and son finally form a loving paternal relationship while one is on his deathbed.

These moments stand out brilliantly in the otherwise bleak setting of the narrative where foreigners are terrorized for being different and religion may very well be a sham. It’s a good book, but a reader must be prepared to work for satisfaction. Gratification and contentment, the book indicates, does not just fall from the sky.
Posted by Gillian Daniels at 11:30 AM